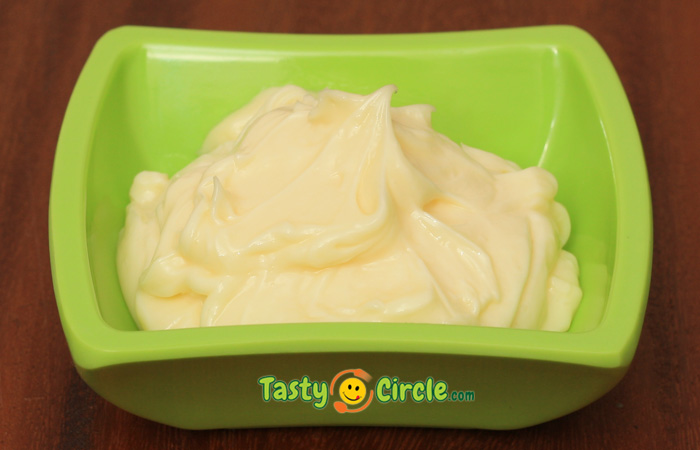 Mayonnaise, often called Mayo, is a thick and creamy dressing that is probably used as a condiment. Besides, it is referred to as the “mother” recipe for many other sauces out there. It is believed that this sauce had its origin in Spain and from there it was taken to France. In fact, the word “Mayonnaise” originated from the French word ‘moyeu’ meaning “egg yolk”. It is important to understand that Mayonnaise is an emulsion of oil and egg yolks - a mixture of two different liquids that generally cannot be combined. Emulsifying is normally done by gradually adding one ingredient to the other while mixing it rapidly (at the same time) which consequently disperses & suspends tiny droplets of one ingredient (probably liquid) through another. In fact, a Mayonnaise recipe that is homemade is simple as well as it has a better flavor compared to its store-bought version. Also, when you have a look at its ingredients and read the recipe, you will see that this recipe is extremely easy to make and you would wonder how such simple ingredients contribute to such great taste. Mayonnaise may vary in color, it is often cream, white or pale yellow.
5 from 2 votes
Prep Time 15 mins
Total Time 15 mins
Cuisine International
Servings 150 ml

1) For the right consistency and creamy taste of the mayonnaise, make sure you start the process with a VERY DRY Blender and Containers. Moreover, you should mix the oil very very slowly.
2) Raw egg is generally not recommended for the elderly, infants, people with a weakened immune system and pregnant women. In order to avoid risks, instead use pasteurized egg yolk to prepare the mayonnaise.
Copyright © 2013 - 2022 Shaan Geo. All Rights Reserved.

According to me cooking is an equal-opportunity talent and I find that anybody can cook. It is not limited by the age, profession, caste, colour or creed of a person. What is needed is the love for cooking. For me the passion for cooking does not stop in the kitchen, when I travel, I continue to be inspired by eating in some of the best restaurants around the world.

Shan Geo thanks for another useful recipe. I have tried this came out very well. I used to buy it from store. Anyway I can gv preservative free mayonise now☺?

Thanks Afeela for trying this Mayonnaise recipe and also for the regular visit.

Shaan, I tried this recipe today. It came out well and it was really tasty. The whole family enjoyed it. Thanks.

Roshan, Thanks for trying this recipe. Glad to know that you all enjoyed. Hope to see here often 🙂

Can we use egg white instead of egg yolk?

Can we use mixer grinder instead of hand mixer?

Yes, you can use it.